On the Relative Credibility of Fonts

Today in fourth hour I briefly discussed why you should consider your choice of font. Following up on that conversation, I thought I’d put up a couple of related links. 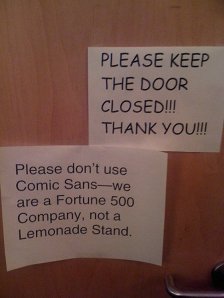 Documentary filmmaker Errol Morris wrote a piece for his New York Times blog this year that suggested (in an admittedly unscientific bit of research) that people who read a factual story found that story less reliable if they were reading it in Comic Sans. Suzanne Labarre wrote her own post about this for the business magazine Fast Company.

Nadine Chahine also weighed in on typography for Fast Company earlier this year, when the results of the much-hyped Higgs Boson findings were announced. The scientists at CERN, who were presenting their findings, did so with a PowerPoint written in… Comic Sans. This was not received well.

Martin McClellan wrote a series on typography for McSweeney’s (a literary journal). If you’re at all interested–and I think they’re interesting–here are parts one, two, and three.

And finally, I’ll let Comic Sans himself have the last word. Warning: he swears like a sailor.

This entry was posted in Uncategorized and tagged comic sans, fonts, typography. Bookmark the permalink.

1 Response to On the Relative Credibility of Fonts

This site uses Akismet to reduce spam. Learn how your comment data is processed.